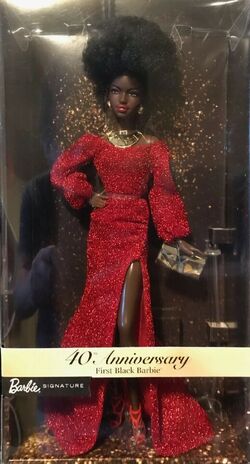 The original Black Barbie® made her debut in 1980. Though beloved friends of Barbie® – like Christie and Francie – were introduced over the preceding decades, this was the first black fashion doll to be hailed as Barbie® herself. She wore a stylish red dress and had her hair in a curly afro hairstyle; she sparked a new era of possibility for girls everywhere. To celebrate her ruby anniversary, 40th Anniversary First Black Barbie® doll fittingly wears a flowing, red trumpet-styled gown with cut-away sleeves, inspired by her iconic outfit. Her hair is styled in a sophisticated up-do, a subtle nod to her original look. Finishing touches include golden hoop earrings, a necklace and a matching clutch. Now, like then, this anniversary doll captures the doll’s signature statement: “She’s black, she’s beautiful, she’s dynamite!”

Placeholder
Caption
Add a photo to this gallery
Retrieved from "https://modelmuse.fandom.com/wiki/40th_Anniversary_First_Black_Barbie?oldid=4765"
Community content is available under CC-BY-SA unless otherwise noted.