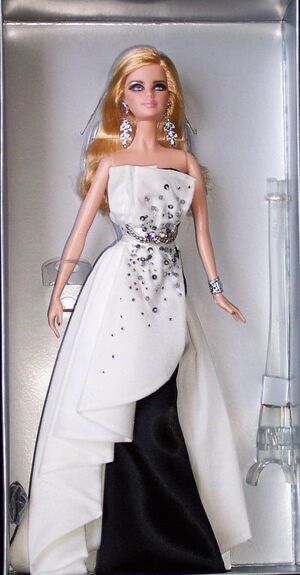 Barbie® doll made her debut in 1959 in a classic black-and-white maillot that became the forerunner of her inimitable style that has mesmerized the world for more than 50 years. Honoring her fashion heritage, Beaded Gown Barbie® doll wears a striking black-and-white satin gown adorned with shimmery silvery sequins and black beads, a ribbon belt and a dramatic train.

Redressed in Randall Craig
Add a photo to this gallery
Retrieved from "https://modelmuse.fandom.com/wiki/Beaded_Gown?oldid=2362"
Community content is available under CC-BY-SA unless otherwise noted.