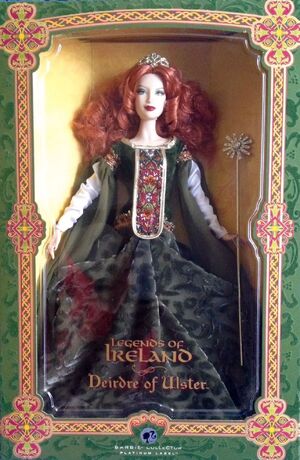 The fourth doll in the Legends of Ireland® Collection is inspired by Deirdre of Ulster, a magnificent beauty whose tragic story made her a legendary heroine of Irish folklore. Deirdre was brought up in seclusion by Conchobar, King of Ulster, who planned to marry her when she was of age. Instead, she fell in love with a handsome warrier named Naisi, fleeing with him to Scotland, but the happiness was short-lived: Conchabar had an ill-fated plan in store. Naisi was killed, and Deirdre, who is also sometimes referred to as Deirdre of the Sorrows, later died from grief. This heartbreaking tale of eternal love results here in a beautiful doll with cascading red hair and a Celtic-inspired gown.

Placeholder
Caption
Add a photo to this gallery
Retrieved from "https://modelmuse.fandom.com/wiki/Deirdre_of_Ulster?oldid=2400"
Community content is available under CC-BY-SA unless otherwise noted.