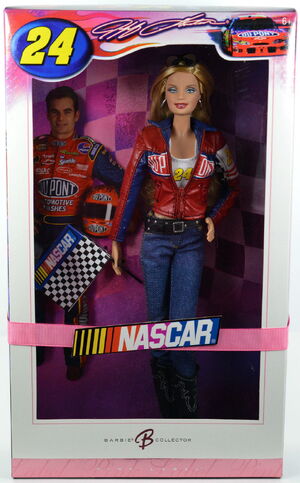 Roaring engines, explosive speed, electric crowds, and deafening cheers all add up to the thrill of NASCAR racing! Designer Sharon Zuckerman pays tribute to one of NASCAR's best with this sensational doll. Dressed in jeans, knee-high boots, and a fitted racing jacket, Jeff Gordon Barbie® doll is ready to cheer Jeff Gordon, #24, on. A true superstar, Gordon began racing at the tender age of five, and has been consistently victorious throughout his career. No wonder this driver counts Barbie® doll among his many fans!

Redressed in playline fashion
Add a photo to this gallery
Retrieved from "https://modelmuse.fandom.com/wiki/Jeff_Gordon?oldid=4718"
Community content is available under CC-BY-SA unless otherwise noted.